6th of December is the Finnish Independence Day, 99 years ago 1917 Finland gained it's independence. For a Finn living outside Finland, the independence day brings in mind all the good things about Finland and why Finland is one of the best countries in the world. 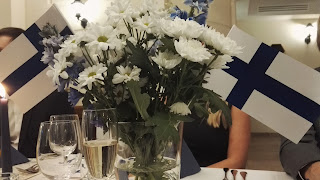 We spend our independence day with the other Finns who live here. Our Honorary Consul invited everybody to a dinner on the occasion of the 99th Anniversary of the Independence Day of Finland. Violins were playing the national anthem of Finland and the food was so good!

Finland is among the world’s top countries according to a range of international measures. Studies have shown that Finland is among the best performers in the world based on criteria such as honesty, innovation, literacy, success in education and opportunities for girls. We have also been deemed the world's most stable country. This provides a strong starting point for celebrating our independence.
-Sauli Niinistö, President of the Republic of Finland
(Message from the President of the Republic of Finland to Finnish expatriate communities on 6 December 2016)

Finland is the best!:

Today I'm so proud to be a Finn! Happy Anniversary Finland!