We had a family gathering in Stockholm for this weekend. We traveled to Stockholm from Poland and my family from Finland. It was great to see my family and have a small vacation at the same time with the people that I love. It is so important for me to see my family and just know that they are always there for me, willing to travel just to spend a couple of days with me. (Crying a bit now...)

But yea, our travel to Sweden didn't start in the perfect manner. Our flight was leaving from Katowice early in the morning. We bought tickets to the train just day before and there were no seats anymore. We also bought bus tickets from the train station to the airport. When we got to the Wroclaw train station, we noticed that the train is 35 minutes late. We were supposed to hop in to the bus just 30 minutes after the train was supposed to arrive. We got to the train and luckily we got seats so that I was able to sleep a bit. Eventually the train was 40 minutes late and we missed the only bus to the airport. We checked from the web that taxi would cost 160zl..... Way too much.... We got an idea and for the first time we used Uber. That costed only 89zl (a lot but not as much as the taxi....) We got to the airport on time just with one experience more. The Uber car was brand new and clean, the driver was driving very well compared to some carzy taxi drivers in Poland, it was a good experince and I can see myself using Uber again sometime.

Our flight was on time and we landed to Skavasta (still 80min bus drive to Stockholm city). In the city my family came to the bus station and the family weekend was ready to start, everybody at the same time at the same place!

Just days before we arrived to Stockholm there was a huge snow chaos. Some flights were cancelled and it was almost impossible to move by any transportation. I'm happy that this didn't influence our trip and the situation was already under control. In the old town we saw that the road was closed for a while as the workers were cleaning the roofs of the buildings and pushing the snow to the ground. The snow is so heavy for the buildings and also if it would fall on its own it could be very dangerous for the people walking down on the street. 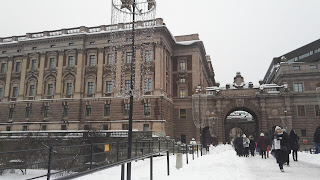 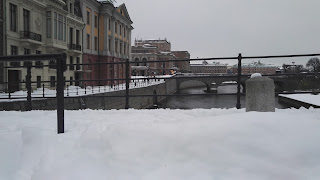 We all have visited Stockholm many times before. It is quite common to take a ferry from Finland to Sweden and stay in the city at least for one day. There were still things we haven't done before when it comes to sight seeing. In my next post I will write about the things we did and saw, with some tips and my favorites!