I couldn’t be happier, my sister just arrived to Wroclaw! Can’t wait to spend time with her, walk in the city, talk, show my favorite places and restaurants. I feel so proud about the city that most likely I will be walking and showing off like I would own the whole city. I bet all my friends have heard at least 10 times that MY SISTER is coming! :)

Last Saturdays football game Poland-Finland 5-0 was masakra (disaster) from Finnish perspective but at the same time it was nice to see all the Poles so happy. I was hoping for a draw as I felt that my feelings are divided. After the third goal I was hoping that Poland wouldn’t score anymore. Everybody else was singing one more, one more (I did the same after first goal) but no more after the third :D I had painted Finnish flag to my cheek and Polish flag to the other side. I was thinking should I take my Finnish scarf and eventually I decided to take it. It felt good standing with the scarf and singing while Finnish national anthem was playing. Polish national anthem was one of the best parts of the game, 40 000 Poles singing proudly. 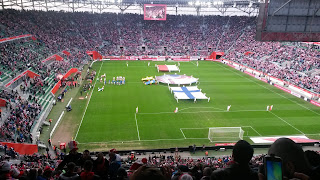 After the game we went to see if could see the players when they are going back to their busses. I was hoping to see my favorite Finnish player but instead we saw Lewandowski, Blaszczykowski, Krychowiak, Grosicki, Sczesny and Tyton. Even got some poor fuzzy selfie with Lewandowski :D

Football cultures are different in Poland and in Finland. In Finland people may just sit, watch the game and clap their hands if somebody scores (lame reactions) :D Just in past few years the Finnish fans in Helsinki have woken up, specially in Helsinki derby the fans are going crazy. It is still nothing compared to Poland. Few years ago when Polish team Lech Poznan came to play to Finland, the security failed badly. In Poland it is great to go to see a football game live as it really feels you are in the game with your full emotions. Most people are singing and showing their emotions. True fans have prepared some torches and huge sheets. Football culture in Poland has two sides, great atmosphere during the games but after.... hooligans are set free.